Carl Abbott is an original practitioner of the Sarasota School of Architecture. Over the four decades of his Sarasota practice, Abbott has adapted the thinking behind Frank Lloyd Wright’s organic architecture to designs appropriate to the subtropics. He is the honorary chairman of Sarasota MOD Weekend.   After studying under Paul Rudolph at Yale University, Abbott received his master’s degree in architecture in 1962. After beginning his practice in Hawaii, he went on to work with I.M. Pei in New York City, and was an original member of TEAM4 in London with his Yale classmates, Richard Rogers and Norman Foster. In the 1960s, Abbott opened his firm in Sarasota, where he soon became a recognized exponent of the Sarasota School of Architecture.   Abbott’s design has a modern yet timeless quality. He is strongly informed by the sacred architecture of the ancient Egyptians and Maya—the manner in which their designs responded to the land and the movements of sun and stars. He feels strongly that architecture and nature shape our lives.   Abbott has been actively involved in the Sarasota Architectural Foundation since its start in 2001. He is a Distinguished Architectural Alumnus at the University of Florida and has lectured and taught in Europe and throughout the United States at such venues as the World Monuments Fund, Frank Lloyd Wright Conservancy, the Paul Rudolph Foundation, Docomomo International, Yale University and Harvard University. Abbott’s survey of his work, In/Formed by the Land: The Architecture of Carl Abbott FAIA, was published in 2012, and accompanied by a critically acclaimed exhibit at Selby Gallery at Ringling College of Art and Design that same year.   Abbott is one of the most highly awarded architects in the Florida/Caribbean region. His regional recognitions include a host of AIA Florida awards, including the Medal of Honor for Design, the Architectural Firm Honor Award, and the greatest number of Test of Time Awards ever presented for “architectural designs of enduring significance.” On the national level, Abbott was elected a Fellow of the American Institute of Architects. He also received Millennium Magazine’s Millennium Award as “one of the outstanding architects of the 20th century.” Abbott continues to design new projects and deliberately keeps his firm small to allow for close personal involvement. He is also working with National Geographic Archeologists at ancient sites in the Yucatan to decipher the spatial genius of the Maya.

Don Chappell (1944-1999) graduated from the University of Texas in the late 1960s and as a young architect worked as an apprentice for Paul Rudolph. In the 1970s, Chapell was active in East Hampton, New York. FUN FACT: Chapell purchased the 150 Morningside Drive lot on Lido Shores in 1983, but did not move to Sarasota until 1993, at first living in and renovating 110 Morningside Drive. 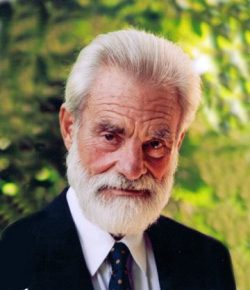 Edward J. “Tim” Seibert (b.1927 - d. 2018)was born in Seattle, Washington, and his family moved to Sarasota in 1942. After studying art at Stanford University between 1947-1950, Seibert then attended the University of Florida, receiving a B. Arch. degree in 1953. He opened his own office in Sarasota in 1955, which – as “Seibert Architects” – still functions today. Seibert designed many award-winning private residences and public buildings in the Sarasota and Southwest Florida area, including The Hiss Studio on Lido Shores (1952), DeVries/Craig Residence (1955), Siesta Key Beach Pavilion (1958), Gulfstream Towers (1960), Shain Residence (1966), the Cooney Residence (1967), Bayport Beach and Tennis Club on Longboat Key (1980) and Bay Plaza Condominiums (1982). Seibert was the focus of the SAF’s SarasotaMOD Weekend, 2017. FUN FACT: Seibert designed and constructed a house (1970) on Manasota Key for Dan Rowan of “Laugh-In” fame. Siebert was also an avid boater and worked as a naval architect.

Frank Folsom Smith (b. 1931) was born in Philadelphia, and his family subsequently moved to Virginia Beach in 1932. Smith is a graduate of the University of Virginia and has made an indelible mark on Sarasota's cityscape. Smith was at the leading edge of retirement center design with Plymouth Harbor, which received the FAAIA Honor and the Test of Time awards. He also won the FAAIA Honor Award for Sandy Cove on Siesta Key. In the 1980s, Smith rehabilitated over 20 downtown Sarasota buildings built in the 1920s; several, known as the Burns Court Historical District, are now on the National Register of Historic Places. 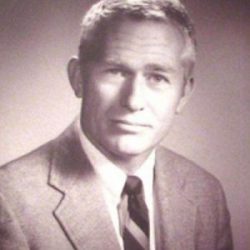 Jack West (1928-2010) graduated from Yale University Architecture School in 1949 and came down to Sarasota to work in the office of Ralph Twitchell and Paul Rudolph. West would eventually partner with Twitchell between 1953-54, and then with architect Elizabeth Boylston Waters, 1956-60, and with engineer Al Conyers, 1966-96. West’s most notable buildings include The Myrtle West House for his mother on Siesta Key (1951), The Nokomis Beach Pavilion (1954), The Hilton & Dorothy Leech Art Studio (1960), known today as “The Round House,” Sarasota City Hall (1966), and the First Federal Savings and Loan Association of Manatee County, Sarasota (1974) - renovated in 2009 by Gateway Bank. FUN FACT: West’s first and last project of his independent career was the Nokomis Beach Pavilion because in 2008 he was commissioned by Sarasota County to renovate the structure.

Joseph Farrell (b. 1932) was born in Gastonia, North Carolina. His family moved to Sarasota in 1947 and he subsequently and he subsequently attended the University of Florida, graduating with a B. Arch. in 1959. Farrell worked with Paul Rudolph while attending architecture school and with Carl Vollmer after graduating. Between 1959-1961, Farrell was associated with William Rupp, with whom he designed office buildings, residences and banks. Since 1961, Farrell has been practicing in Honolulu, Hawaii. 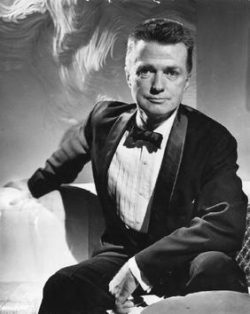 Paul Rudolph (1918-1997), born in Elkton, Kentucky, was the son of a Methodist minister. He graduated from Alabama Polytechnic Institute (later Auburn University) in 1940, and worked with Sarasota architect Ralph Twitchell during the summer of 1941 before attending Harvard University and studying under Walter Gropius. Following wartime service at the Brooklyn Naval Yard, Rudolph returned to Sarasota and Twitchell’s office in 1946, becoming an associate in 1948 and full partner in 1950. Rudolph left Twitchell in 1951 but stayed in Sarasota until 1958, when he became Chair of Yale University’s Department of Architecture. In 1966, Rudolph established his office in New York City and proceeded to design significant structures around the world until his death from cancer due to exposure to asbestos.

Philip Hanson Hiss (1910-1988) was born in Brooklyn, New York. At the age of 20, Hiss independently toured South America on his Harley-Davidson motorcycle and in the 1930s sailed around the world. As an amateur anthropologist and photographer, Hiss published books describing the customs, art and architecture of Bali (1941) and the Dutch Antilles (1943). Following World War II military service, Hiss first worked in the US diplomatic service in Holland and then settled in Sarasota in 1948. Beginning in 1949, Hiss began developing the Lido Shores neighborhood of Lido Key, Sarasota, initially using architects Ralph and William Zimmerman. Later, Hiss would commission Paul Rudolph to design the model house for Lido Shores, the famous “Umbrella House” (1953). In 1956, Hiss became Chairman of the Sarasota County School Board, and proceeded to commission new schools from the Zimmermans, Rudolph and fellow Sarasota School architects Mark Hampton, Gene Leedy, Victor Lundy and William Rupp. In 1958, Hiss received a Ford Foundation grant to establish New College, and served on its first Board of Trustees. Hiss left Sarasota in 1965 and died in London in 1988. FUN FACT: Hiss was the cousin of accused Soviet spy Alger Hiss (1904-1996).

Ralph Twitchell (1890-1978) was born in Mansfield, Ohio, and first became acquainted with Florida when his mother brought his family down south every winter. He studied architecture at Rollins College and pursued graduate study at McGill University in Montreal, Canada, and then Columbia University in New York. During World War I, Twitchell was a test pilot and sustained multiple injuries that left him almost dead. Twitchell first came to Sarasota in 1925 to supervise the construction of John Ringling’s “Ca d’Zan” for New York architect Dwight James Baum. Until 1936, Twitchell spent his summers in Connecticut and his winters in Sarasota, eventually moving full-time to Sarasota and establishing his own architectural practice and construction company. Inspired by the modern architecture of Frank Lloyd Wright, Twitchell experimented with reinforced concrete and the Art Deco style in the 1940s. Just before World War II, in April 1941, Twitchell employed the recent Auburn University graduate Paul Rudolph as a draftsman, who would later become an associate and then full partner, founding the “Sarasota School of Architecture.” Twitchell and Rudolph split in 1951. Twitchell would later partner with Jack West and his son Tollyn, practicing architecture well into the 1970s. FUN FACT: Twitchell was kicked out of the American Institute of Architects (AIA) in 1935 because he simultaneously ran an architect’s practice and a construction company. In practice, this did not matter much because at that time the AIA was merely a club and not the regulatory body that it is today. 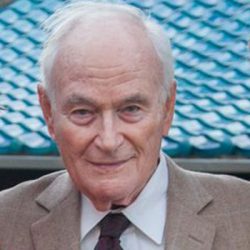 Victor A. Lundy (b. 1923) was born in New York City to Russian immigrant parents. Talented in painting and drawing as a child, Lundy studied architecture at New York University before World War II. After the war, Lundy completed his studies at Harvard University’s Graduate School of Design, which at the time was being run by German émigré and Bauhaus founder Walter Gropius. Lundy moved to Sarasota in 1951 and immediately began thriving in its highly active intellectual and creative environment. Lundy moved his practice to New York in 1960 and to Houston in 1976, where he continued to produce innovative forms similar to the ones he designed in Sarasota. In addition to being an architect, Lundy is also an accomplished artist, painter and watercolorist. FUN FACT: In February 2014, the General Services Administration released a documentary about the long life and work of Lundy, freely available on their website: http://www.gsa.gov/portal/content/185759 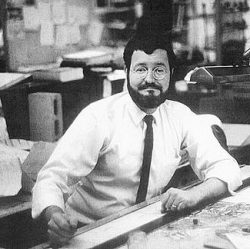 William Rupp (1927- 2002) was born in Philadelphia, Pennsylvania. He received his B. Arch. degree from the University of Florida in 1953, after which he worked in the office of Paul Rudolph until 1955, when he established his own office in Sarasota. Until 1965, Rupp practiced in Sarasota, partnering at times with Gene Leedy and Joseph Farrell, after which he moved his office to Naples Florida. In 1968, Rupp moved to New York to work for Morris Ketchum, Jr. and in 1972 to Amherst, Massachusetts to work for Callister, Payne and Bischoff. Between 1978-1995, Rupp taught full-time at the University of Massachusetts at Amherst. Rupp died tragically died in 2002 when a fire swept through the house that he had designed and built himself.