The house was built in 1955 for former City of Sarasota Mayor David Cohen and his wife, Eleene, is a classic example of the Sarasota School of Architecture movement, with glass walls that open completely to the elements. Cohen, a violinist, was a co-founder of the then-Florida West Coast Symphony (now known as the Sarasota Orchestra). Cohen championed the building of the city-owned Van Wezel Performing Arts Hall (1970, William Wesley Peters, Taliesen Associated Architects). The Van Wezel is under threat of demolition in 2018 as the city and Sasaki Architects present plans to redesign the bayfront. The home was renovated in 2006 by Seibert Architects. 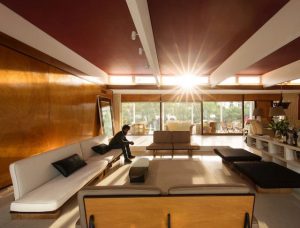