This house was designed for a husband-and-wife musical couple who requested an interior space for impromptu performances. Rudolph, a classically-trained pianist, delivered with a central 54-by-35-foot open space that has a sunken performance and conversation area in the center.

An unbuilt two-story design for the house won an award from Progressive Architecture magazine in 1954, but the Cohens eventually built a one-story house that, like most Rudolph designs, is organized around a grid of columns – in this case, 9 x 3 – into which all the spaces fit. The house seems to be a variation of the square-module layout of Rudolph’s Walker Guest House on Sanibel Island (1952), especially because the original two-story design had movable flaps.

Oriented along a north/south axis with a sun porch along the entire west façade, the house is a modern interpretation of traditional southern architecture with large openings, a clear structural rhythm, and a wrap-around porch.

David Cohen would later serve as Sarasota’s Mayor between 1964-66 and was instrumental in creating the city-owned Van Wezel Performing Arts Hall, built between 1968-70. 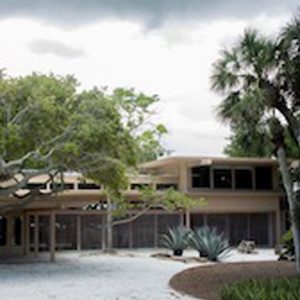 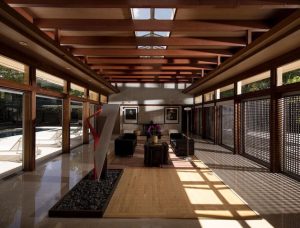