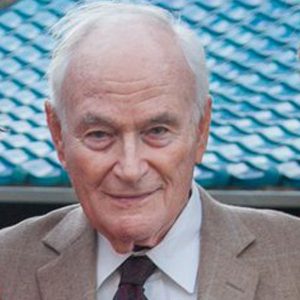 Victor A. Lundy (b. 1923) was born in New York City to Russian immigrant parents. Talented in painting and drawing as a child, Lundy studied architecture at New York University before World War II. After the war, Lundy completed his studies at Harvard University’s Graduate School of Design, which at the time was being run by German émigré and Bauhaus founder Walter Gropius.

Lundy moved to Sarasota in 1951 and immediately began thriving in its highly active intellectual and creative environment. Lundy moved his practice to New York in 1960 and to Houston in 1976, where he continued to produce innovative forms similar to the ones he designed in Sarasota. In addition to being an architect, Lundy is also an accomplished artist, painter and watercolorist.

FUN FACT: In February 2014, the General Services Administration released a documentary about the long life and work of Lundy, freely available on their website: http://www.gsa.gov/portal/content/185759