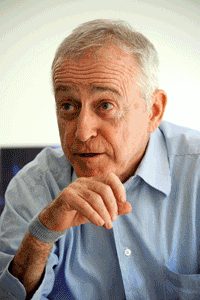 Carl Abbott is an original practitioner of the Sarasota School of Architecture. Over the four decades of his Sarasota practice, Abbott has adapted the thinking behind Frank Lloyd Wright’s organic architecture to designs appropriate to the subtropics. He is the honorary chairman of Sarasota MOD Weekend.

After studying under Paul Rudolph at Yale University, Abbott received his master’s degree in architecture in 1962. After beginning his practice in Hawaii, he went on to work with I.M. Pei in New York City, and was an original member of TEAM4 in London with his Yale classmates, Richard Rogers and Norman Foster. In the 1960s, Abbott opened his firm in Sarasota, where he soon became a recognized exponent of the Sarasota School of Architecture.

Abbott’s design has a modern yet timeless quality. He is strongly informed by the sacred architecture of the ancient Egyptians and Maya—the manner in which their designs responded to the land and the movements of sun and stars. He feels strongly that architecture and nature shape our lives.

Abbott has been actively involved in the Sarasota Architectural Foundation since its start in 2001. He is a Distinguished Architectural Alumnus at the University of Florida and has lectured and taught in Europe and throughout the United States at such venues as the World Monuments Fund, Frank Lloyd Wright Conservancy, the Paul Rudolph Foundation, Docomomo International, Yale University and Harvard University. Abbott’s survey of his work, In/Formed by the Land: The Architecture of Carl Abbott FAIA, was published in 2012, and accompanied by a critically acclaimed exhibit at Selby Gallery at Ringling College of Art and Design that same year.

Abbott is one of the most highly awarded architects in the Florida/Caribbean region. His regional recognitions include a host of AIA Florida awards, including the Medal of Honor for Design, the Architectural Firm Honor Award, and the greatest number of Test of Time Awards ever presented for “architectural designs of enduring significance.” On the national level, Abbott was elected a Fellow of the American Institute of Architects. He also received Millennium Magazine’s Millennium Award as “one of the outstanding architects of the 20th century.” Abbott continues to design new projects and deliberately keeps his firm small to allow for close personal involvement. He is also working with National Geographic Archeologists at ancient sites in the Yucatan to decipher the spatial genius of the Maya.