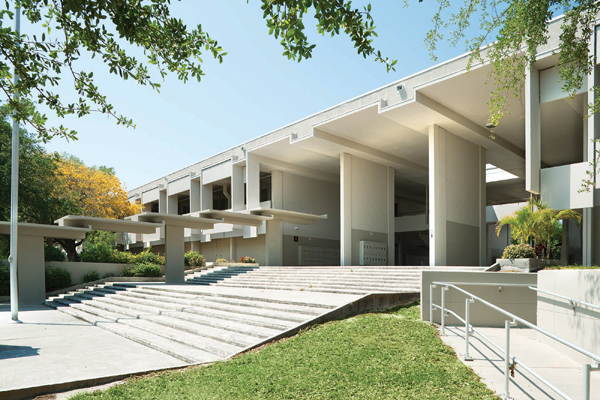 Paul Rudolph’s Sarasota High School, 1960, was the last building that he completed in Sarasota before moving to New Haven, CT, to become the Chairman of the Department of Architecture at Yale University. It is a document of the transition of Rudolph’s work from the light, wood-and-glass structures of his early years in Sarasota to the heavier, Brutalistic concrete structures of his later career around the world.

In 2012, the School Board of Sarasota County proposed renovations to Sarasota High School that the SAF felt were not in keeping with Rudolph’s original vision. Working to avoid the problems that arose in 2009 with the demolition of Rudolph’s 1958 Riverview High School, the SAF opened a dialogue between the School Board, the Sarasota community and local preservationists, which resulted in the complete renovation of the building back to its original 1960 exterior appearance.